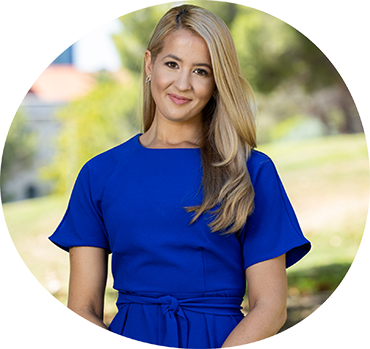 For the past decade, Rebecca has built a reputation as a dynamic storyteller and news breaker.

As a television reporter for most of her career, Rebecca has covered some of Perth’s most high-profile news stories, shaping complex information into material an audience can relate to.

The self-proclaimed newshound broke into the industry in 2008 as a newsreader for radio station 92.9, on the popular Hamish and Andy Show.

Within two years, Rebecca moved into television, packing up her life and going bush, to gain invaluable experience as GWN7’s regional Kalgoorlie reporter.

It wasn't long before she was working as a senior journalist, presenter, chief of staff and producer at Network Ten in Perth, a job she held for more than six years, working on stories across Western Australia, interstate and overseas.

In 2013 she won Australia’s Best TV Story at the Yorella Media Awards for a heart-wrenching piece on a wheelchair-bound woman, who used duct-tape to pursue her dream of surfing.

She was also recognised for breaking the arrest of the alleged Claremont Serial Killer in 2016.

Rebecca understands how today’s fast-paced newsrooms work and what Perth’s mainstream media is looking for. With her broad range of skills and contacts, she will be well placed to advise on strategy and pitch stories for CGM clients.